The Diocese of Salford maintains two Roman Catholic cemeteries in Greater Manchester – St Joseph’s in Moston and St Mary’s in Wardley. They are totally independent of local authorities and have their own criteria for memorial size, as well as separate rules and regulations. 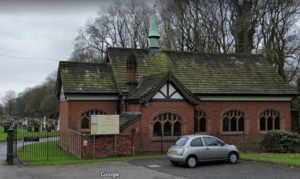 The chapel at St Marys cemetery in Wardley

Something noticeable at St Joseph’s Cemetery, which opened sixty years earlier than St Mary’s, is the number of marble statues there. These are from the days when there were no height restrictions. Nowadays however, granite, which is far more durable and less prone to damage and vandalism, is the most common material when it comes to Roman Catholic memorials.

Alberti Lupton & Co’s long history begins in 1911, when William Lupton was given the contract to inscribe public graves at St Joseph’s Cemetery, which had opened in 1875. One hundred and ten years later, our offices are situated only fifty metres from this cemetery entrance, so it is natural the supply of Roman Catholic memorials form a key part of our business.

In local authority maintained burial grounds there has been a steady increase in recent decades in the number of secular memorials. The same cannot be said of Greater Manchester’s Roman Catholic cemeteries. We continue to receive plenty of orders for traditional memorials, with the Sacred Heart and Our Lady proving popular. The Sacred Heart reflects love between two people, while Our Lady is a reference to the Roman Catholic shrine at Lourdes in France.

At our premises in Moston Lane, we have a large number of Roman Catholic memorial designs available. As well as the Sacred Heart and Our Lady, we also have a number that feature saints and crosses. Examples of crosses are designs depicting the crucifixion and we also have Celtic options, reflecting the Irish ancestry of many Roman Catholics in the Manchester area.

Designs with a Roman Catholic theme may form the basis of the memorial itself, or be added to a traditional ogee shaped one as an engraving or ornamentation such as a small statue. This means that whether the Roman Catholic element of the memorial is integral or discrete, a range of budgets can be catered for. In addition to supplying and installing memorials, we are able to renovate older ones and refix them to modern safety standards. We can also add additional lettering and ornamentation.

Although there are differences in what is permitted in Greater Manchester’s Roman Catholic cemeteries compared to those run by local authorities, one area where there is no deviation is in memorial standards. Only  BRAMM registered masons, including Alberti Lupton & Co, are allowed to work in these two catholic cemeteries. Current managing director Gerard Lupton has thirty years experience of designing and fixing headstones and is BRAMM registered. His son James is an apprentice mason, the fifth generation of Luptons to work in the business.

If you are interested in erecting or restoring a memorial at either of Greater Manchester’s Roman Catholic cemeteries please contact us by telephoning 0161 681 1272 or complete our enquiry form here.