CEMETERIES ON THE M66 CORRIDOR

The M66 corridor is a link between the M62/M60 Manchester outer ring road motorway and the M65 which runs through central and east Lancashire. The most southerly eight miles are the M66 motorway then north of Edenfield it becomes the A56. It remains a dual carriageway bypassing Haslingden and Accrington before connecting with the M65 near Hapton. 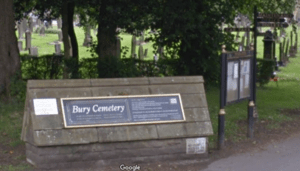 Along the M66 corridor are a number of cemeteries that Alberti, Lupton & Co are licensed to work in. The motorway is situated within the Metropolitan Borough of Bury and where it merges into the A56 the local authority is the Lancashire borough of Rossendale. Further the area around Accrington falls under Hyndburn. We are able to work in cemeteries in Bury and Rossendale.

All of the councils maintained by the Metropolitan Borough of Bury along the M66 corridor allow new burials and interment of cremated remains. They have a range of charges which are cheaper for residents than non residents. They also continue to allow kerb sets, something many councils have stopped in recent years. There are separate sections for Muslim and Jewish burials in Bury cemetery, as well as at Ramsbottom despite it being the smallest of the three. Bury and Ramsbottom also have specific sections for burial of babies and young children. Radcliffe is the most environmentally friendly, having an area set aside for green burials where eco-friendly coffins can be used and trees planted instead of erecting a headstone.

Rossendale Council operates four cemeteries, two of which are within very close proximity to the M66 corridor. Haslingden cemetery is just a minute or two’s drive from the A56, while Rawtenstall is about five minutes away. Bacup is further around five miles while the geography of the Rossendale council area means that Whitworth is nine miles away, very close to the town of Rochdale which is served by another motorway altogether, the A627(M).

All four of Rossendale’s cemeteries have plots available for regular burials and cremated remains in Church of England, Nonconformist and Roman Catholic sections. Haslingden and Rawtenstall also have separate areas for Muslim burials.

Alberti Lupton & Co has been a family run monumental mason business for over 110 years spanning five generations. We are Greater Manchester’s oldest family run mason and any work we do in cemeteries along the M66 corridor will be carried out to NAMM (National Association of Memorial Masons) standards. If you are considering a new memorial or renovation of an existing one in the Bury or Rossendale council areas please contact us and we will be pleased to help you.