Alberti, Lupton & Co has celebrated its 110th birthday this month. It was in November 1911 that William Lupton, went into partnership with the Alberti brothers to form Alberti, Lupton & Co. Since then the company has gone from strength to strength with five generations of the Lupton family having been involved in the business. 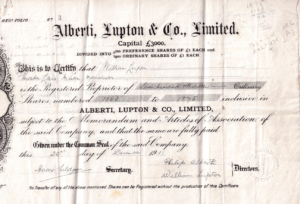 William Lupton was then a 29 year old memorial mason living with his wife Ann and son William in Thatched House Row, off Moston Lane. William had the contract to inscribe public graves at St Joseph’s Cemetery, which was very close to his home. He operated his business out of a small hut situated within the cemetery grounds.

Elsewhere in Manchester John Alberti had a shop in Oxford Street selling religious themed plaster figures, while his brother Philip had marble works in Lightbowne Road, near the cemetery. John and Philip saw the potential in William and the benefits of a partnership by pooling their expertise and resources were obvious. The three men formed Alberti, Lupton & Co with the first directors meeting taking place on the 24th November 1911. The first premises were in Lightbowne Road but in 1913 the company moved to Moston Lane, where it remains today.

After World War Two, William’s son William Ralph Lupton (commonly known as Ralph) expanded the business to include church restoration and fitting out of new churches. Amongst the projects the company was involved in was work at Salford Cathedral and the Sacred Heart Church in Oldham. He was able to do this due to modernisation of the workshop, investing in compressed air tools to assist with masonry and carving, as well as a Flextol polishing machine. Despite this the majority of work for private graves continued to be done by hand by the skilled masons employed by the company. 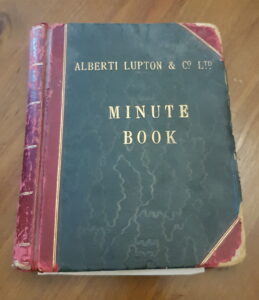 Ralph retired in 1975 and passed the reins to his son Michael Lupton. He oversaw the business coming into sole ownership of the Lupton family in 1983. This came about following the death of Rose Alberti, daughter of John, at the age of 92. Michael purchased her shares, bringing to an end 72 years of partnership during which each family had selected a director.

Michael’s brother David did not join the business though, instead going into the priesthood. When the company celebrated its 75th anniversary in 1986, David said a special mass before family and friends attended a special buffet to toast the future. Michael made a speech to those present in which he paid tribute to his father Ralph who had died two years previously. He told those present “After he retired he was always there to ask, to lean on and to confide in. I still miss his counselling two years after his death, he was a great dad and a great boss”. Michael also acknowledged the work done by more than thirty staff over the years, who had worked as masons, fixers, letter cutters and polishers to make the company successful.

Alberti, Lupton & Co also made some more significant investments in the mid 1980s. The premises were expanded and new technology was purchased to speed up the sanding, inscribing and polishing process. During this decade the current managing director Gerard Lupton, great grandson of William, joined straight from school in 1982. He has remained in the business full time ever since, becoming a director in 1993 and taking sole control of the business on his father’s retirement in 2000. For the first two years that Gerard was in the business there were three generations involved as Ralph continued to help out with administration until his death in 1984.

Gerard has continued the tradition of providing a personal and understanding service to bereaved families. Alberti, Lupton & Co Ltd rarely advertise, with most of their work coming from personal recommendation. No installation work is subcontracted with all memorial fixing being carried out in house by BRAMM accredited fixers. Gerard has been a BRAMM registered fixer for more than thirty years, he has a passion for designing and scribing headstones and a fine eye for details.

Whilst Gerard spends a lot of time in cemeteries, his wife Deborah runs the office. She is a people person who is very skilled at offering advice and guidance to bereaved families so they choose the right memorial for their loved one. However it is his wife Deborah who spends most time in the office. Deborah is not the first Mrs Lupton to work in the office. Gerard’s mother Margaret also worked there taking charge of sales and bookkeeping from 1992 to 2008.

Six years ago Gerard and Deborah’s son James joined the business as an apprentice memorial mason. He is the fifth generation to work for Alberti, Lupton & Co and looks set to keep the business in the family for many more years to come.